NATIONAL COALITION OF VICTIMS IN ACTION

After the terrible tragedy at Virginia Tech on April 16, 2007, the NCVIA spearheaded an effort to put together a resolution of support to the Virginia Tech community. This resolution was ultimately signed by 55 victim service organizations and over 100 individuals from all over the USA.

On Friday, September 21, 2007, a cross-section of those organizations and individuals met with officials from the university to present the resolution. Organizations represented included POMC, NOVA, the Brady Campaign, Maryland Crime Victim Resource Center, NCVIA and the Office for Victims of Crime. School officials included the President, Provost, Dean of Students, Student Senate president as well as the newly appointed Director of Recovery and Support.

Billed as a “Resolution of Victim Support and Healing”, the meeting provided an opportunity to help the university to deal with the aftermath of the crime by highlighting the kinds of services that would be available to the school to the extent they are needed.

We then laid a wreath at the memorial site that has been erected on the campus to the victims of the April 16 tragedy.

The meeting went very well; the university representatives were impressed with our offer of support and assistance and very grateful for the sense of caring and concern that we expressed. 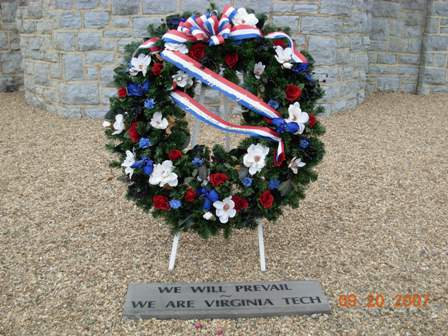 It is our fervent hope that this effort will serve as a model for the kind of response we Americans should make to tragedies of this kind. It is imperative that people in this country recognize that violence is everyone’s problem and understand that everyone needs to be involved in the solution to the problem of violence in America. Otherwise we are condemning ourselves and our children to lives in a society where, as bad as the problem is today, it can only get worse.

A.  Early Release/2009 Update: We HOPE that the new administration in Washington will put to rest FOREVER the illicit tampering with the

VOCA fund that has gone on for the last eight (8) years!

1. California Looks like the Governor plans to sign legislation that may result in as many as 40,000 felons being released because of the overcrowding that is occurring within the corrections system. YES, WE SAID FORTY THOUSAND!!!!!

2. The Illinois legislature hasn’t given up, either. There may be any number of scurrilous actions as the 1009 legislative session gets underway.

GIVE US YOUR FEEDBACK ON ANYTHING YOU HEAR WITH REGARD TO EARLY RELEASE IN YOUR STATES!

NCVIA Board Member, Pat Tuthill, has announced a scholarship program in memory of her daughter, Peyton, murdered in 1999.

The Peyton Tuthill Foundation, non-profit, 501(c)3, in memory of Peyton Tuthill, daughter of Pat Tuthill of Florida,  will be giving 4 – $1000 college scholarships to children who have been left behind by homicide.  Applications may be downloaded from the web site  at www.peytontuthill.org and are currently being accepted.